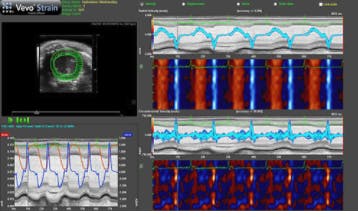 Simply stated, strain is deformation (i.e. a change in length) that occurs when a force is applied. Strain is a complex derivative of Doppler imaging and is a more direct measurement of intrinsic myocardial contractility than global values such as ejection fraction or fractional shortening. A positive strain value indicates elongation of tissue where as a negative strain value indicates shortening of tissue. This highly quantitative analysis detects abnormalities not apparent visually.

Why Should You Care About Cardiac Strain?

Perfect for Research in: